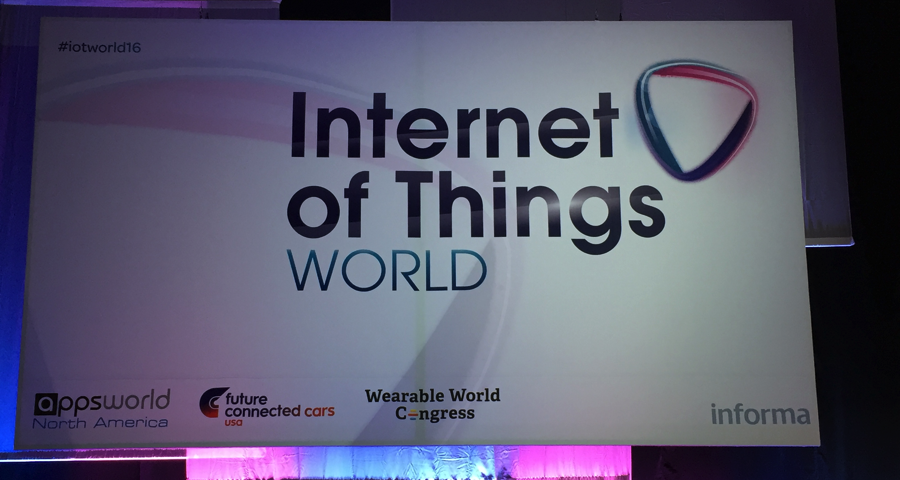 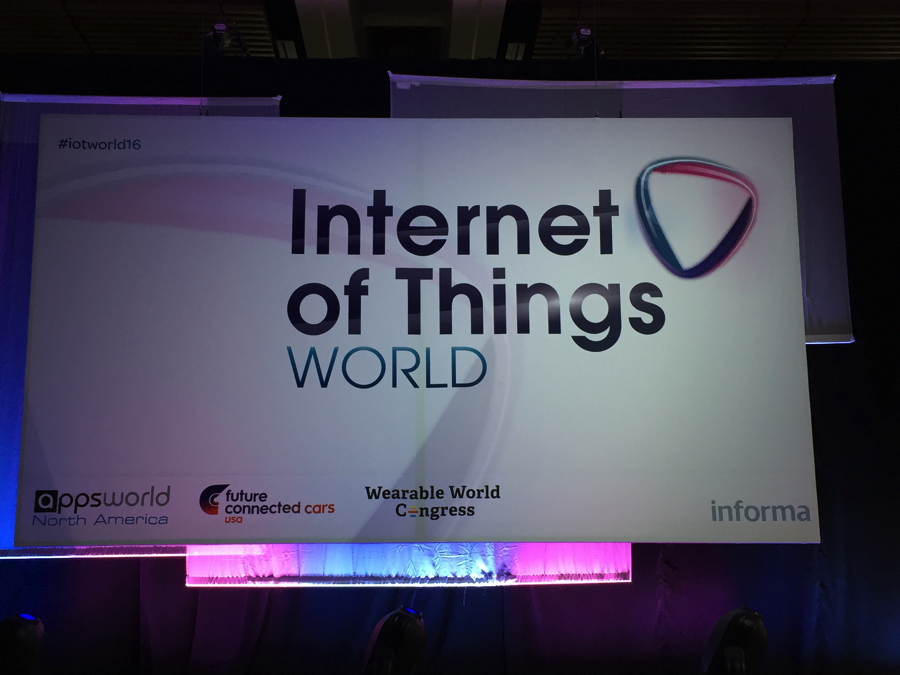 This week, we attended the Internet of Things World event in Santa Clara, CA. Over the past few years, we have all heard the hype surrounding the Internet of Things (IoT). From consulting companies like McKinsey, to research outfits like Gartner and large multinational OEM’s like Cisco, all have projected billions of connected devices through 2020 and beyond. To date, much of the mainstream focus has been on consumer IoT applications. Products like Google’s “Nest” which is a “smart thermostat” for homes, and other “smart home” devices and even wearables like FitBit have generated much of the early buzz in IoT. As the initial hype has died down, we are starting to see a larger and more exciting opportunity being created in the industrial IoT space.

At this week’s Internet of Things World event, while several “consumer” type of companies were present, judging from the executive presentations on Day 1, the larger the opportunity resides in industrial applications. Moreover, we believe the industry is well positioned from every aspect for this dream to become a reality, sooner rather than later.

The executive sessions set the tone for the conference. The main theme was “Disrupt, Innovate, Monetize”. Bruce Sinclair, President of IoT, Inc. kicked off the event with his excellent overview of what he termed “the outcome based economy” which is the “coming together of more and more ecosystems that produces” a desired outcome for each company. He used the example of a company who has transitioned from producing a legacy device to modernizing it using available technology to achieve a desired outcome.

Ubiquitous technology: From various software packages and hardware components such as sensors, connectivity and high performance ARM processors, today the technologies are in place to connect the billions of devices in various industries. Many of the semiconductor companies like Broadcom (WiFi, BLE), Intel, Analog Devices, ARM and others were showing off their latest technologies that are readily available and driving innovation in all end markets. For example, Hitachi discussed its sensors that transmit data on trains, mining equipment and dozens of other industrial devices, according to Kevin Eggleston, Senior VP of Hitachi’s social innovation and IoT business unit. Today, the company is rethinking how to present its IoT offerings to even more vertical markets. With sensors, bandwidth and processing power becoming so affordable, Hitachi can now apply sensors to nearly every piece of machinery to predict when maintenance will be needed.

New business models: Companies such as Kaiser Permanente (healthcare), Bosch (automotive components), PepsiCo (consumer) and Harley Davidson (motorcycles), among many others, were mentioned as end users of IoT technologies to bring faster, better, more reliable products and services to market. Many of these companies are using technologies such as SAP’s HANA platform to improve manufacturing, lower maintenance costs and improve the overall customer experience.

Smart cities are becoming a reality: Many municipalities from Boston to Chicago and Los Angeles are levering IoT technology to improve the quality of life. For example, the City of San Francisco is using IoT in its quest to become the first U.S. city to have a fully connected “ecosystem of transportation,” where driverless cars and transit, ride sharing services like Uber and Lyft, and even bike-sharing apps will be connected through one platform where residents can easily plan their transportation from Point A to Point B, according to Timothy Papandreou, chief innovation officer for the San Francisco Municipal Transportation Agency.

Collaboration is critical:  While in the world of technology, being first to market seems to be the norm, almost all presenters discussed collaboration as being critical to the success of IoT. Clearly this makes sense as no particular company can possibly provide an end-to-end solution, given the vast array of technologies available within the ecosystem. The picture below from ADT is a good example of what the IoT ecosystem looks like: 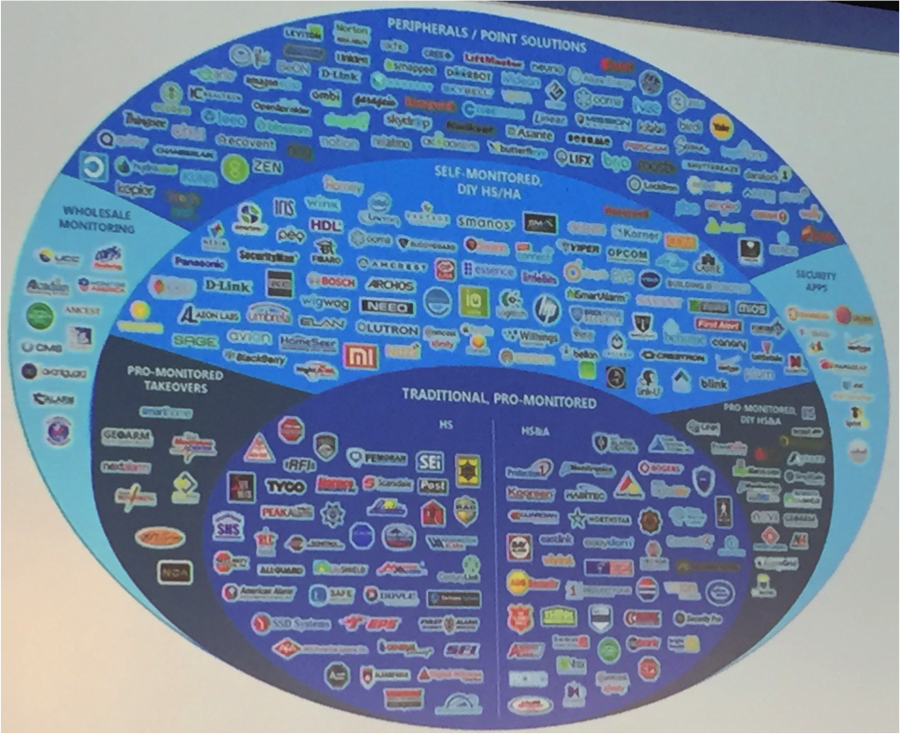 Building automation is an emerging focus area: Systems targeting this segment have been using sensor data and driving control actions for many years. However, with the advent of numerous connected devices (due to IoT), combined with Moore’s Law that drives ever smaller electronic devices, and cloud connectivity we are now realizing greater use of sensor data in system optimization and energy efficiency, according to Sudhi Sinha, VP of Product Development, Building Technology & Services at Johnson Controls. “IoT, Big Data and analytics are transforming a very well established industry to make this world a better place to live and work.”

Security is a critical factor: For example, ADT presented its view of how it is evolving from being the home alarm company, to collaborating with other companies, and using modern technology to transform itself into a home networking, automation and security company using the power of IoT-related technologies. Their approach makes sense, as they are using connectivity and analytics technologies, combined with their strong presence in the home security market to improve the overall home security experience for end users. 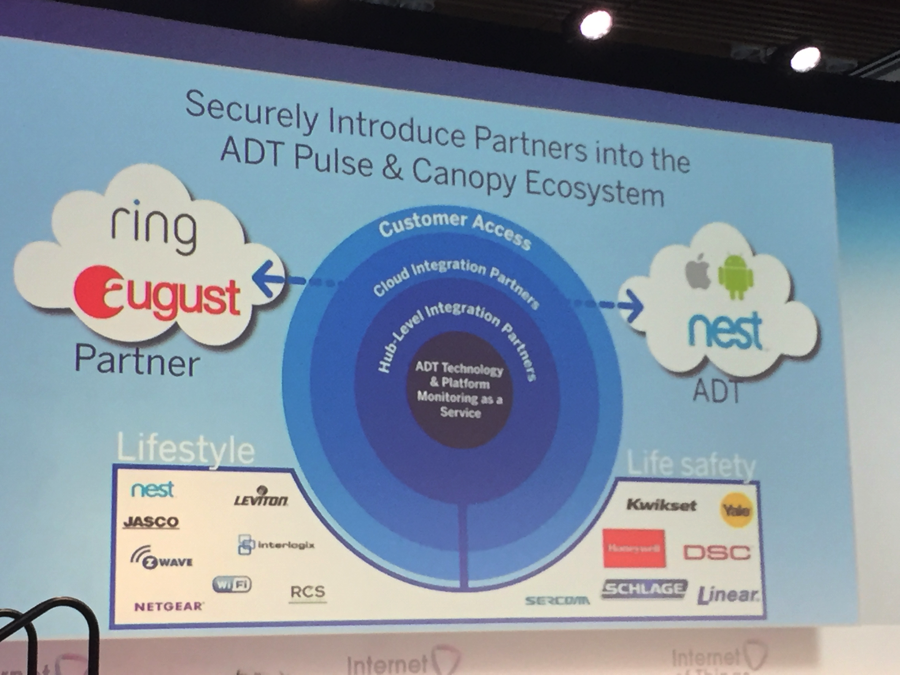 Other companies who had interesting presentations were: 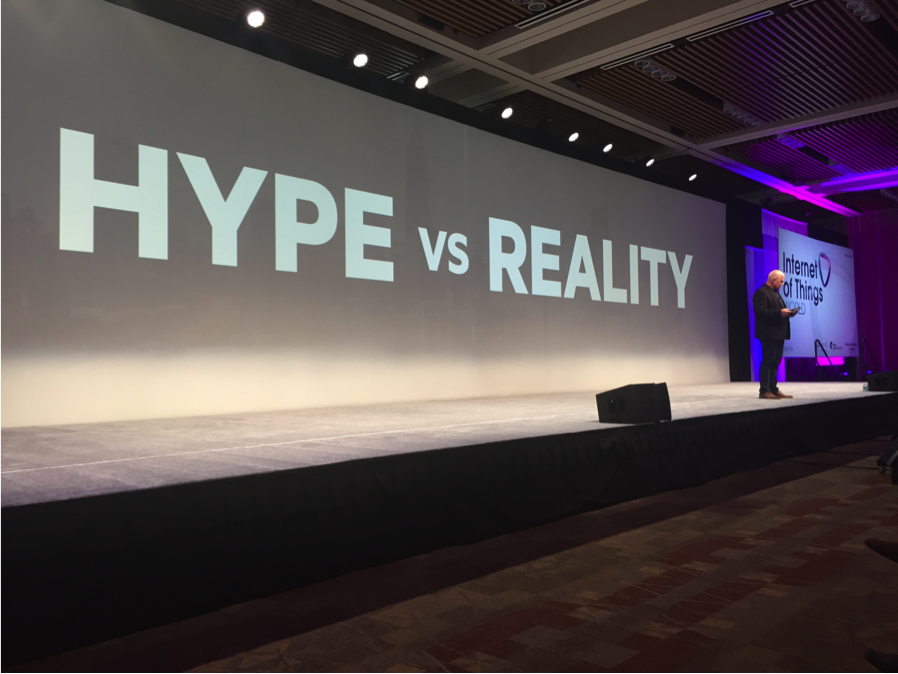 HP Enterprise did a great job of separating the “Hype from the Reality” of IoT. Their areas of focus are the connected car, smart energy/smart cities, and telecom. In connected cars, we are moving beyond just telematics and infotainment systems to cars that are connected via mesh networks. Car companies are now spending millions of dollars in R&D to develop connected car platforms. For Smart Cities, they see municipalities leveraging technology to gain real time insights into traffic flow, and developing smart parking, and lighting. And in telecom, they see the challenge for the industry as having to move from providing large infrastructure systems to supporting millions of IoT devices, and therefore are now looking at building out IoT overlay networks using virtualization and software. 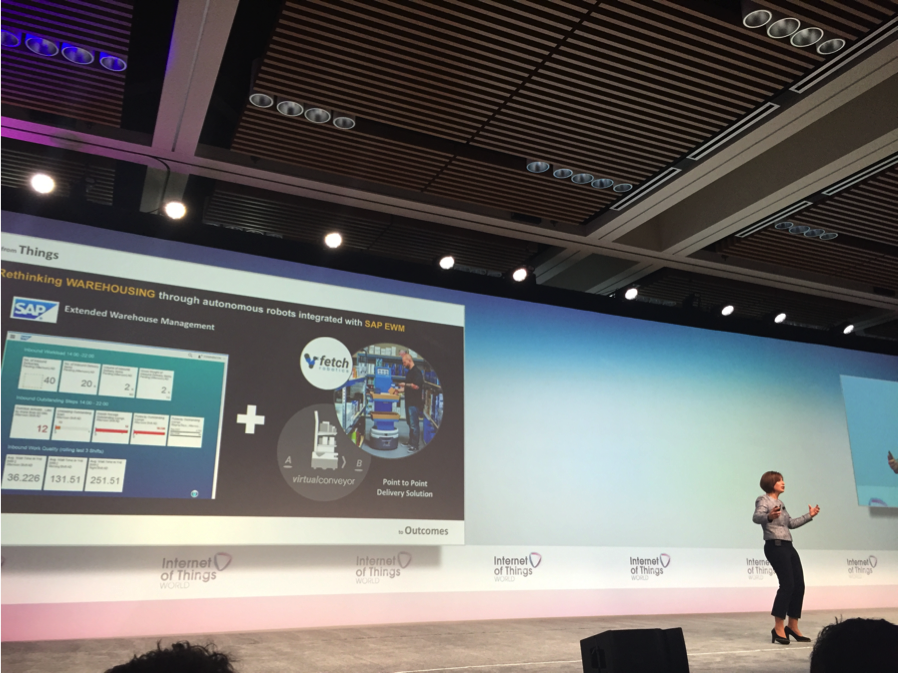 SAP discussed 2 main drivers within all industries as being critical to the adoption of IoT. First, IoT is enabling disruptive business models. And second, all companies are now using IoT-enabled technologies to optimize their business processes. The company gave examples of non-tech companies such as Under Armour, several shoe manufacturers, and others of using SAP’s technology along with thousands of connected devices to collect and analyze millions of data points related to improving operations. Whether its using predictive maintenance to improve maintenance and service costs, or asset intelligence networks to lower their inventory expenses, companies in all industries are now involved in this movement.

In addition to these companies, several other well-established companies such as Cisco, Samsung and others were present, not to mention the hundreds of start ups each targeting a specific segment of the IoT ecosystem. We have no doubt this will be an exciting area to watch. In future segments, we plan to highlight specific companies and technologies bringing IoT into practical application areas.